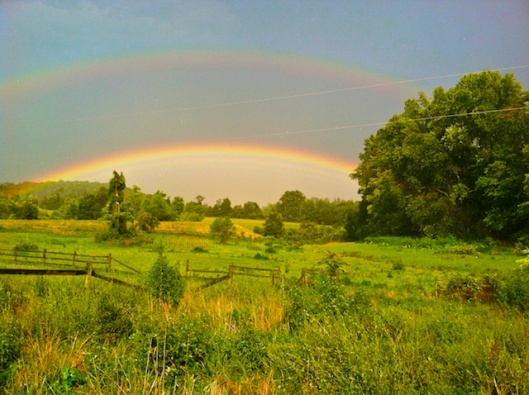 Double rainbow in the Virginia countryside after the storm. © 2012 EddinsImages

It has been a week since the Eastern United States was hammered by a fast-moving, deadly storm. Here in central Virginia, after an eerie, silent stillness with no warning of what was to follow, we were blasted by a sideways, screaming wind. Nothing else… just wind. Then, the wicked, other-worldly tempest brought-on wild, non-stop lightning in the clouds above – as if someone was flicking a light switch on and off, on and off. The lights flashed all around us without pause. There was still no sound, except the roar of the wind. Later came lightning that was lower in the sky, accompanied by rumbles of thunder, downpours of rain, and hail. Throughout it all, most devilish was the incessant wind. Many likened the 70-plus mile-per-hour wind to the scary roar of a train.

We took the rampage seriously. After returning home safely during the first-half of the storm, my husband sat inside the house with the front door open, listening, for the sound of an approaching tornado. My son and I retreated to the far side of the house, opposite the ancient maple tree outside, wary that the tree would fall into the house. We learned after-the-fact that this unusual storm is called a derecho – a widespread, fast-moving weather event that features intense, straight-line, damaging winds and sometimes thunder and lightning.

And, sadly, for many in Virginia, that very scenario was a reality. Most tragically, however, is the fact that when it was all over, just an hour or so later, lives were lost, property was severely damaged, and, for a great number of families, power was out. Today, one week later, the clean-up continues. Many families remain without power. We’ve seen working power crews here from as far away as Texas. I am so very sorry for families who lost loved ones.

Even so, Mother Nature has a way of recovering. First, there was the double rainbow outside my barn. Even without electricity at the barn, seeing the rainbow brought me a feeling of hope. 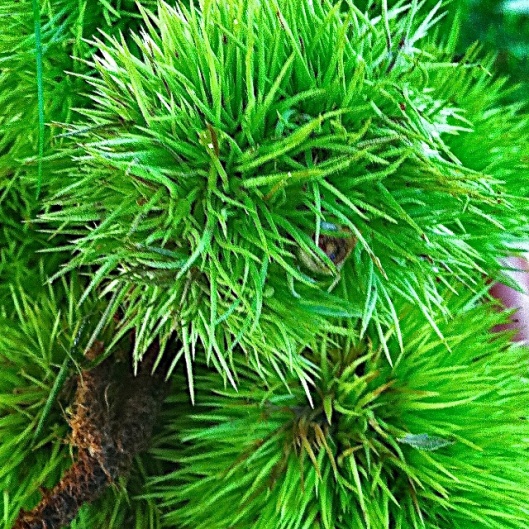 Green chestnuts fall to the ground early during a Virginia storm. © 2012 EddinsImages

Then, throughout the past week, I’ve been finding little fallen orbs of nature… beautiful trinkets dropped by trees and plants. And each is green.

A handful of black walnuts picked-up from the grass below after stormy weather in Virginia. © 2012 EddinsImages

So, with these verdant little reminders of our future and all that is good in life, we rebuild, replant, and reclaim.

I know… I know… it is unusual – unheard of, really – for me to post just one photo… However, for once, here it is! Herewith, I present my contribution to Blissfully Domestic’s Summer Fun Photo Challenge. This week’s topic is Fun/Playtime.