Mr. Snuggy, before his haircut. Doesn’t he look like he’s had enough of his messy coat? © 2012 EddinsImages

We have dogs. Lots of dogs. So many, in fact, that I will refrain from specifying the exact number. What I can say is that all, except one, were rescued… um, except for the puppies. But, that’s another story altogether. And, of course, we’ve got lots of other animals as well…

Lets just say my husband, son and I have morphed into a sort of private animal rescue league (yes, my husband is a saint).

Anyway, as it turns out, most of our dogs are breeds, or breed crosses, that require regular grooming. And that presents two problems: 1) Half of our dogs get car sick to and from the grooming salon, even the seasoned travelers; and, 2) Paying someone to wash and clip more than half a dozen dogs every few months can become both burdensome and pricey.

Finally, when a vet determined that we’d have to clip one of our chow chows regularly (to stave-off a recurring medical issue) we decided to bite the bullet. We purchased our own electric clippers. For less than $150 dollars – about the cost of just two professional groomings – we bought ourselves an Andis AGC clipper kit with detachable blades, plastic blade attachments, clipper oil and a carrying case. The packaging on the AGC clipper proclaimed it to be, “SUPER Duty. Great for the toughest grooming jobs. Thin to thick coat dogs, including heavily matted.”

Our Andis AGC electric clipper set and clipper blade spray. Despite our less-than-meticulous care and storage, the clipper has never failed to perform. © 2012 EddinsImages

Also, we purchased additional blades. In total, we have an Andis 10 UltraEdge 1.5mm blade, an Andis 7FC CeramicEdge 3.2mm blade, and an Oster 7F blade. Our final purchase was a spray can of Andis Cool Care Plus coolant/disinfectant/lubricant/cleaner/rust preventative. We’ve found the spray essential to use throughout each grooming to keep the working blades cool and lubricated and the dogs comfortable.

To be fair, I’m not altogether unfamiliar with clippers; owning more than two-dozen horses gets one accustomed to such things. However, the intricacies of grooming a dog is an entirely different animal than the broad swipes one makes clipping a big horse body. 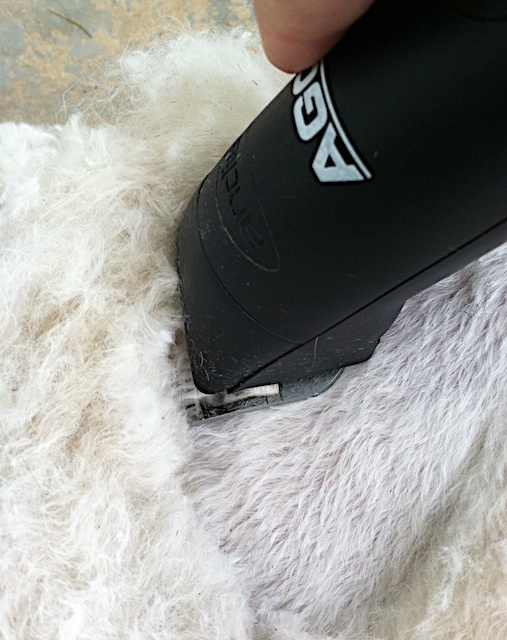 Certainly, there are grooming techniques, “dos and don’ts,” if you will, that professional dog groomers know and practice. My husband and I don’t have the slightest bit of training in such matters. However, we are extremely careful, especially when it comes to delicate pup face and neck areas. We’d rather be safe and less perfect than sorry. Same goes for anything we do with grooming scissors. The health, safety and comfort of our beloved pets is far more important than making them look even close to “show perfect.” I won’t begin to discuss the horror stories I’ve heard about grooming “mistakes,” even those made by licensed professionals. 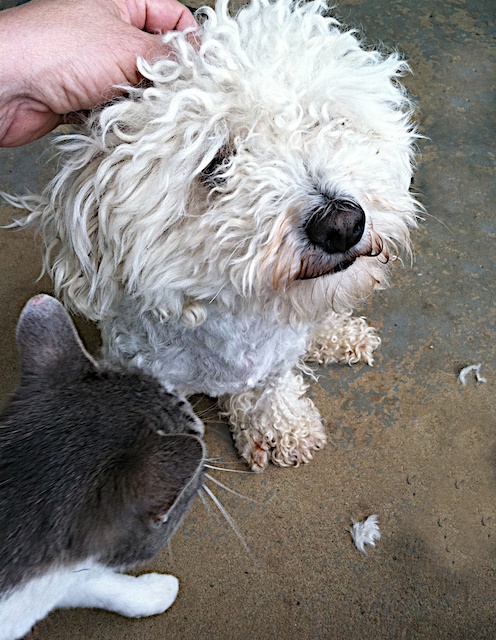 Whenever we groom one of the dogs, there is at least one cat hanging out – rubbing, licking, purring – to show support for his or her comrade. © 2012 EddinsImages

Regardless of our dog-grooming ignorance, we’ve managed for the last year and a half or so to take all dog clipping matters into our own hands.

And, the results have been surprisingly good.

Feet and faces still need a bit of practice, both from the dogs and their neophyte groomers, but, each time we do it, we all get better and better at the process.  We don’t use a grooming table or any sort of restraint; in fact, our little maltipoo, Mr. Snuggy (who has a lamb-like thick, curly coat) has gotten so he just rolls over to “help” as we clip his underside. And, he always feels better after his grooming; for days and days, he is more playful, bright and affectionate after his haircut.

Without a doubt, the Andis AGC clipper has been the very best pet-related purchase we’ve ever made.

And, I do believe the ceramic blade remains cooler than steel blades. The Andis clipper has paid for itself over and over again. It has plowed – without ever overheating, stopping, or injuring a dog – though dirty, matted, thick, undercoated chow chow hair; filthy, mud-clobbed, stick-tangled, poop-matted border collie fur; dreadlocked, twisted, matted and chewed-from-play maltipoo hair; and long, knotted maltipoo-beagle coats.  Often, there is so much matted hair, the process reminds me of the spring  sheep shearings I watched as a little girl 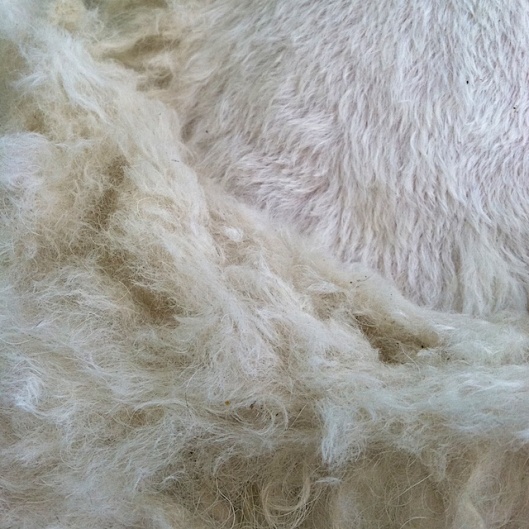 Even so, our dogs don’t seem to mind the process nearly as much as they did the scary trip to the dog groomer. And, when it is all done, each dog always seems to appreciate his or her “new” coat. Especially Mr. Snuggy, who knows he’s a handsome fellow.

Best of all, we’ve saved ourselves a pretty penny and the hassle of unpleasant car interior clean-ups during rides home from the professional grooming salon!