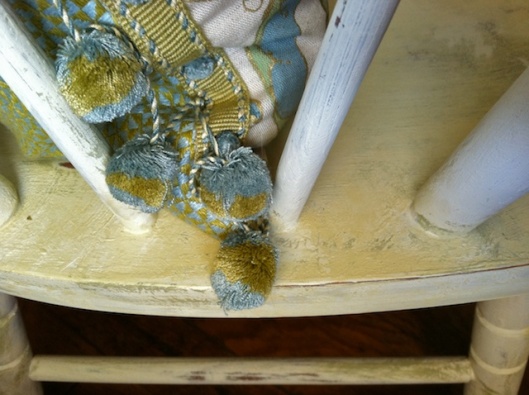 After completing several DIY painted furniture projects, I’m kind of liking my Annie Sloan Chalk Paint. As Ms. Sloan promised during her visit to the east coast this spring, her low VOC paint does adhere to anything, and requires no primer or special prep. I like that. Also, it is quick drying and presents a “matte velvety” finish. Perfect for decorative painting projects, especially worn or old furniture that could use a facelift. 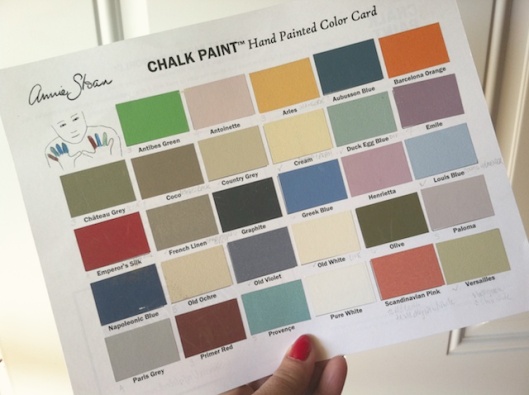 Annie Sloan Chalk Paint palette offered in the United States for 2012. I’ve fiddled with color settings a bit on my computer in an attempt to accurately replicate the color card in my hand on your computer screen. © 2012 EddinsImages

So far, my eight ASCP colors – out of 29 offered by Sloan today – are each quite conservative and light in tone. They are: Old White; Cream; Versailles; French Linen; Country Grey; Old Violet; Duck Egg and Louis Blue.

I need some more colors in my palette… more intense colors with punch! These are code words, off course, for: buy more paint! The only problem is, when I try to decide which two or three colors will come home next… immediately, my list grows to no less than eight different hues. Hummm. At close to $40 per quart, I’ll be giving some serious thought to my choices.

Meanwhile, here are some photos of a rocking chair I repainted recently. My grandmother purchased the chair about 40 years ago for my brother’s bedroom in the family home on Cape Cod. The chair is quite comfortable, especially for a rocker. However, I am tired of the plain-jane stained wood, and my house today is littered with stained wood pieces. Something had to be transformed… 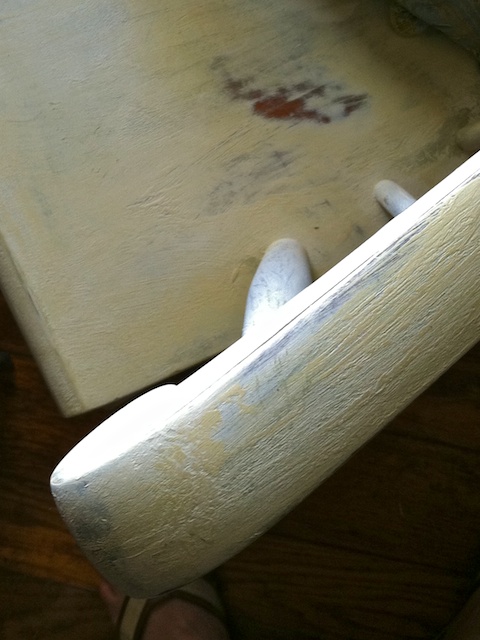 Closeup of my DIY project: the rocking chair repainted in layers with Annie Sloan Chalk Paint. I sanded in places to show the original wood finish. © 2012 EddinsImages

For the rocker, I used Old White, then layered and textured a bit with Cream and Versailles. Also, I sanded in places throughout the process to let the original wood show through. So far, I’ve not finished this piece with my final layer of wax, however, I plan to top it with Annie Sloan Soft Wax in Clear.

All in all, the project took several hours… a solid half to three-quarters of a day, considering drying time between coats. I was going for a sort of worn, shabby chic, textured look that was light (but not white) and would work in a variety of decorating styles. 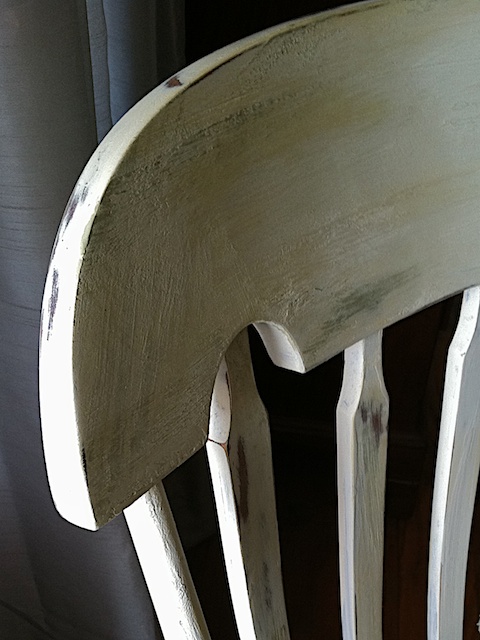 I am quite pleased with the chair’s new versatility in our country home. In fact, it goes perfectly well with the little blue stool I painted with Annie Sloan paint earlier in the year… 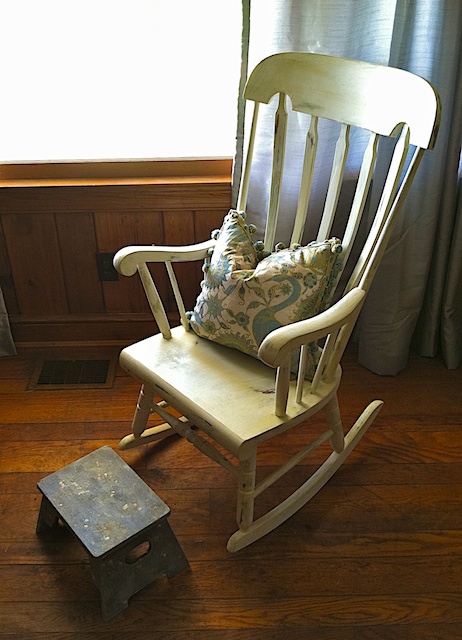 All photos taken with iPhone 4. © 2012 EddinsImages

Once upon a time, I stood many hours a day in front of an easel as I applied oil paints to canvas after canvas. Invariably, at the end of each day, I found the serendipitous riot of of colored-paint dribbles, accidents and wipes on my palette much more satisfying that the carefully selected strokes and precise swaths of paint I’d meticulously applied to my canvases. That’s one reason I abandoned my fine art painting (but that’s another story, for another day)…

During a recent Annie Sloan Chalk Paint workshop here in Virginia (please read my April 7 post), I was most delighted to hear British decorating paint guru Annie Sloan talk about methods for texturizing her paints. And, I was even more turned-on when she said, “There are no rules.”

I spend so much time these days striving to get things exactly right, carefully writing, designing, working and reworking things over and over, not wanting to make a mistake, that I’ve forgotten how to just have fun, and not worry about consequences. Annie Sloan gave me permission to work quickly, to be messy, and best of all, to make mistakes.

I’ve got a basement chock-full of old, unloved furniture, and I decided to experiment with a few pieces.  After the Annie Sloan workshop, I stopped off at Janet Metzger’s The Empty Nest at The Fox Den Antiques Mall in Warrenton, Virginia, to purchase a few cans of Annie Sloan Chalk Paint. The “experimental” paint colors that I chose were mostly lighter tones in blue, green and creamy neutral hues. Also, I purchased a can of Annie Sloan clear wax and a can of dark wax, and I picked-up some uber cheap paint brushes at Lowes (the short-handled kind of brushes that come several to a package… I mean really cheap!).

My first paint victim was an inexpensive, little white stool that I’d purchased at Target several years ago for my husband’s grandchildren to use. The stool’s surface was very slick, and and after years of use, it looked quite shabby (not in a good way). It was going to be interesting to see how successful I could be trying to transform a slick, monochromed, modernesque surface into something I hoped would appear multi-colored and textured, as well as old and worn (in a good way).

With my cheapo paintbrush, I quickly covered the stool with rough strokes of Annie Sloan’s Old Violet, leaving some of the stool’s original white finish still showing. This first step took me less than a minute from start to finish. FWIW, the Old Violet appeared to me to be lighter and brighter IRL than you might think when just viewing a small paint chip (especially when I left some of the base white showing through). However, I was going to address the “bright” a little later…

The top of the stool shows multi-layers of textured paint and waxes. The underside has no dark wax yet. © 2012 EddinsImages

When I was finished with the first layer of color, the paint easily rinsed out of the cheapo brush in water (as well as my hands!). After the Old Violet dried, just a few minutes later, using the same brush, I applied random strokes – some quite thick and “blobby” – of a light blue called Louis Blue. Then, before the Louis Blue dried, again with the same brush (not so carefully rinsed this time), I added a light yellowish green called Versailles. And again, I made my strokes random, in all sorts of different directions using various amounts of pressure. I tried to apply heavy applications of paint in order to create ridges and valleys of texture over the originally smooth surface.  Also, I pushed the wet Loius Blue and Versailles colors together in a few random places on the stool. Moreover, I used a rag to wipe-up and smear paint in areas.

There were no rules. I was making a mess on-purpose.

Then, I reapplied some more of the Old Violet here and there. Next, with the same cheapo brush I spattered some of the Versailles over the surface (this would have been more successful with a decent brush). Finally, I added some Old White spatters. The entire process took less than an hour.

After applying several layers of paint, then sanding, and a adding coat of clear wax, a dark wax is applied to tone the color and accentuate the “hills and valleys” of the painted surface. © 2012 EddinsImages

When the paint was dry enough to touch, I applied a coat of clear wax all over the stool and gave it a good rub. Next, I hand-sanded some areas, including some of the edges and corners of the stool to let under-layers of color show through, replicating “years” of wear and tear. Then, I applied a coat of dark wax, heavier in some places than others. After a few minutes, I wiped-off the dark wax, using varied amounts of pressure around the stool. This toned all the colors and left dark low-lights in the nooks and crannies of the textured paint.

About two days later, when the wax was fully dried, I buffed the stool by hand to give it a more polished finish… and viola!

No longer ugly and abandoned in the kids’ room, my reinvented, repainted stool has proven to be quite versatile. The mix of toned-down colors blend in just about anywhere around the house and I don’t worry about getting it dirty. The rumpled “old” surface wears wonderfully well and the more it is used, the better it looks. Plus, it reminds me of my younger days, filled with oil paints and wonderful mishmashed palettes. Yes… I definitely need more colors.

Meanwhile, I’ve got my eye on a really boring wooden rocking chair sitting here in the family room… <wink>